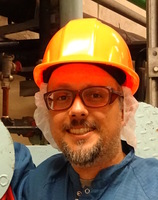 I am a researcher at the Laboratório de Instrumentação e Física Experimental de Partículas (LIP) and at the Faculty of Sciences of the University of Lisbon (FCUL). I am the president of the Scientific Council at LIP since 2017. I founded and lead the LIP Neutrino Physics group, currently active in the SNO+ and DUNE experiments. At DUNE I am the Calibration and Cryogenic Instrumentation Consortium Leader.

I graduated in Physics at the University of Lisbon in 1995. I carried out my MSc and PhD research in Neutrino Physics, simulating the detector response and designing the calibration systems for the Borexino solar neutrino experiment at INFN Milano and INFN Gran Sasso in Italy. I defended the PhD thesis at the University of Lisbon in January 2002 and moved to Canada where I had a Post-Doc position at Queen's University in Kingston. There I worked mostly on the calibration of the Sudbury Neutrino Observatory (SNO), and was a leader of the Energy and Optics group in 2003-2004.

In late 2004 I moved back to Lisbon, to LIP. With an FCT Post-Doc grant, I worked on the installation and commissioning of the ATLAS/LHC Tile Calorimeter at CERN and, after a successful proposal to continue participating in the SNO experiment, I started a small group on experimental neutrino physics. In ATLAS I was active in detector-related work (I was TileCal run coordinator in 2008 and editor of the paper on the commissioning results in 2010) and in physics analysis, on the measurement of the Higgs boson decay to two b-quarks. I co-supervised two PhD theses in ATLAS. In 2017 I left ATLAS in order to focus primarily on Neutrino Physics.

In 2007 I was hired as Auxiliary Researcher at LIP. As for the work in SNO at LIP, together with a graduate student that started in 2006, we developed the optical calibration of the third phase of SNO, and also the neutrino oscillation analysis. In 2007, with further LIP colleagues, we participated in founding the new SNO+ Collaboration dedicated to upgrade the SNO detector to carry out a wide range of neutrino measurements including neutrino-less double-beta decay. Over the years I was the PI of several projects to fund the SNO+ activities and am the SNO+ spokesperson for Portugal. The group has grown and contributed substantially to the design and construction of two calibration systems -- an external optical fiber light distribution system and a mechanical system for source deployment -- as well as backgrounds and physics analyses. I was elected chair of the SNO+ Scientific Board in 2010. I lead the SNO+ Optical Calibration group, the SNO+ Source Review Committee and I am a member of the Executive Committee and the Analysis Coordination Committee.

In 2018 I led the proposal by the LIP Neutrino Physics group to join the Deep Underground Neutrino Experiment (DUNE) Collaboration. In the same year I was appointed Leader of the newly created Calibration Consortium, merged in 2019 with Cryogenic Instrumentation. The responsibility of this consortium of 22 institutions in the US and Europe is to design and build the calibration systems and cryogenic monitoring instrumentation for the DUNE far detectors. I was one of the chapter editors and authors, for calibrations, of the DUNE Technical Design Report. I am currently focusing on the design and test of prototypes of the calibration systems to be installed soon in one of the ProtoDUNE detectors at CERN. In addition to research, I was an invited Auxiliary Professor at the Physics Department of the University of Lisbon between 2011 and 2019, where I have taught a number of courses on Nuclear and Particle Physics. At LIP I was elected President of the Scientific Council in 2017, with renewed mandates in 2019 and 2021.